“When you play the game of thrones, you win or you die.” — Cersei

Let’s bring this quote to life in what I like to call a survival tree of the fittest.  This week’s analysis will focus on the character survival in Game of thrones.  Chow down and enjoy! 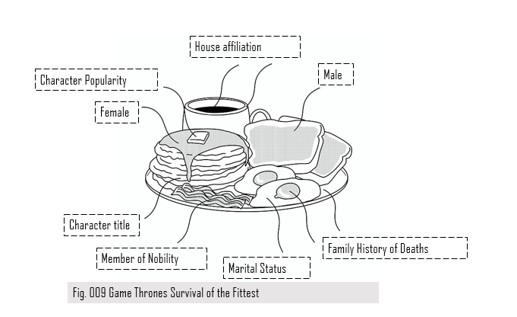 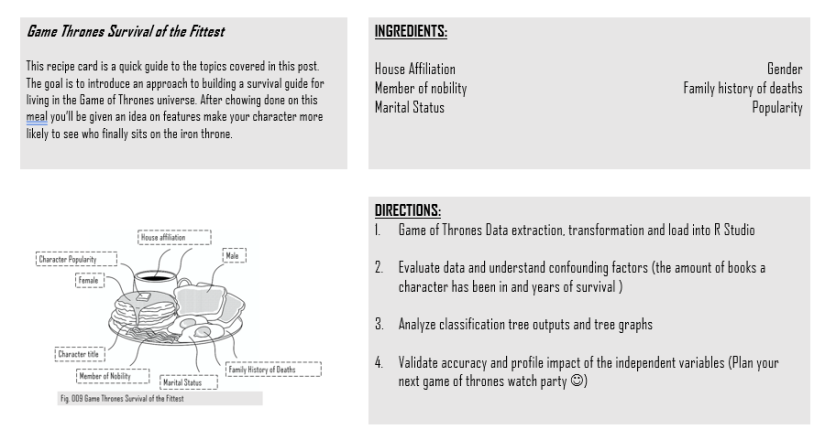 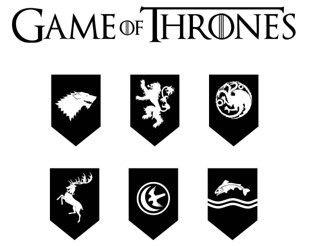 Winter is coming and you’d like to know your chances of survival in the Game of Thrones universe.

To do this I’ll build a classification tree with my event being set to is the character alive (1 for yes, 2 for zero).  Classification trees in general test the null hypothesis, when we reach my tree visualization I’ll assign the color red to instances of were it’s highly probable of a character death.  Green leaves will indicate it’s highly probable a character survives… as long as all this criteria is met.

Think of this tree as a really morbid family tree, but since the data is Game of thrones it fits right into place.

The variables have readily available to me (hopefully they have importance) are as follows:

From the initial read I see knowing if a character is popular among fans and if they are male hold the highest importance in determining survival.

Also the variables I have available account for 75% of the variability (a 25% miss-classification rate).

Let’s say you moved to Westeros, out of the gate you have a 25.4% chance of meeting your end.  At those odds I’m taking my chances but I should stay under the radar as much as I can, because the data warrants it.

If you become a popular character or are an integral part of the story, your death becomes more meaningful and your probability of survival is worse than a coin flip.

So let’s say you’re a like-able character (you can’t help it), not all is loss, as long as you’re a female.  The highest survival rate is the popular female character group.  This is a classic tale of high risk high reward. 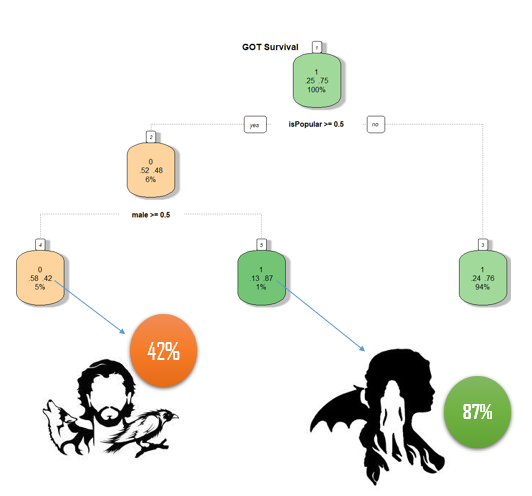 A classification tree is a great way to visual your data and now I’ll walk us through this Game of Thrones survival tree.

Let’s start at the very top, the tree assumes everyone has a 75% of survival.  Now as the tree splits this Is where the interesting part begins, and our data story begins to unfold.

If you are a popular character you flow to the left side of the tree, your survival rate of 75% now drops to 48%.

Staying to the left side of the tree there is another important split, are you a male or female?  Female characters have a higher probability of surviving (87% if you’re popular and 76% if you’re under the radar).

If you’re a male and you’re popular you have a 42% chance of survival (We’re looking at your Peter Dinklage).

Now here’s the largest caveat to take with this classification tree: I’m assuming it will no longer be relevant after the final season.  Winter is coming and most likely our characters will see their end by hands of White Walkers.

What have we learned from diving into the Game of Thrones Data?

An interesting tidbit…If you become popular and you are a female (hopefully the mother of dragons) you boast the highest survival rate of anyone in this universe, 87%.

After you have consumed this meal, I hope you take these findings and enjoy your episode of Game of Thrones. J  Also as always enjoy the featured pancake recipe below! 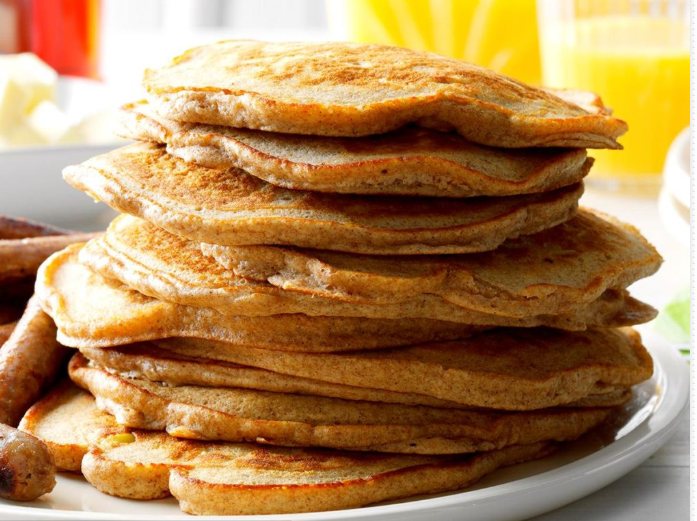 There’s is no argument against the Marvel Cinematic Universe being a financial success.  I’ll try to identify variables which can equate to box office success. The goal is to fit a regression model to Box Office USD for Marvel Cinematic Movie releases.
*At the time of cooking Ant-man and the Wasp did not have finalized Box Office USD data (This movie was excluded.) – TF 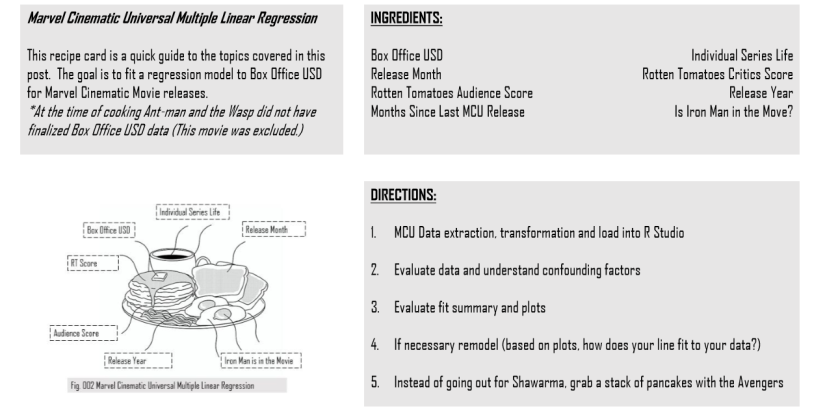 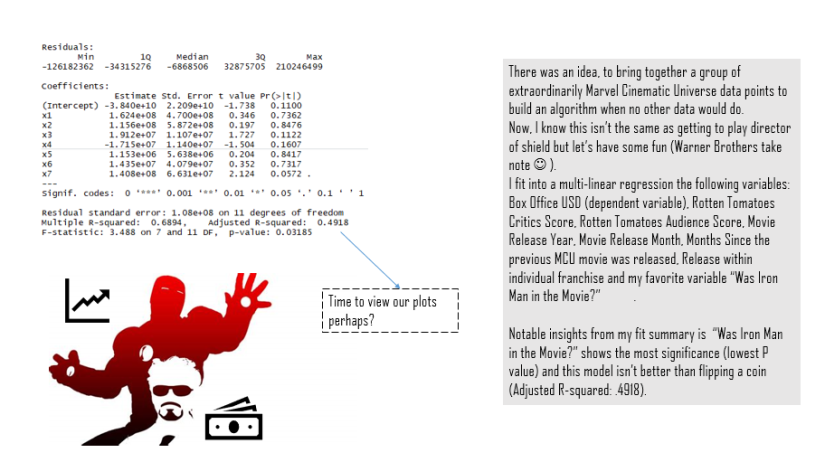 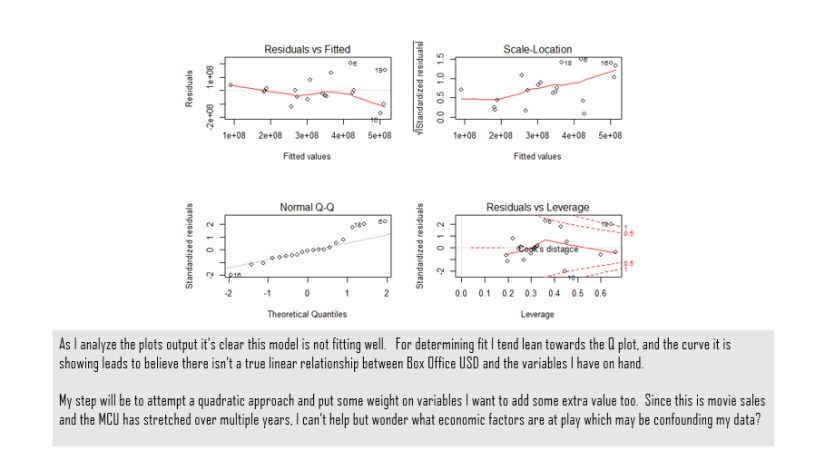 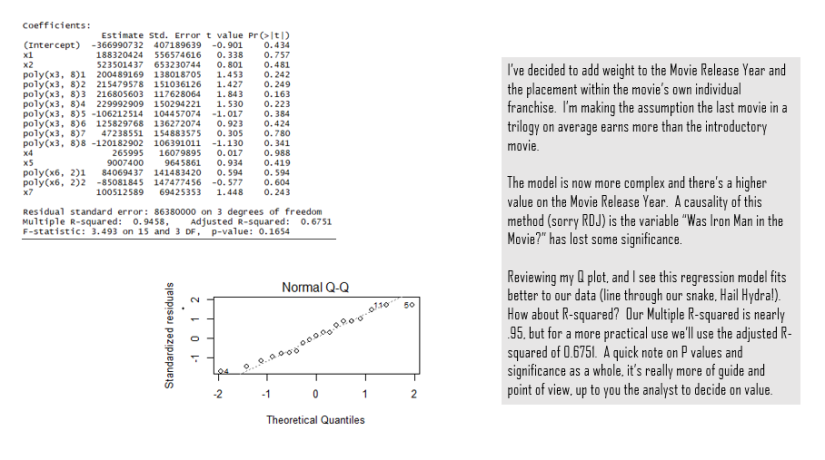 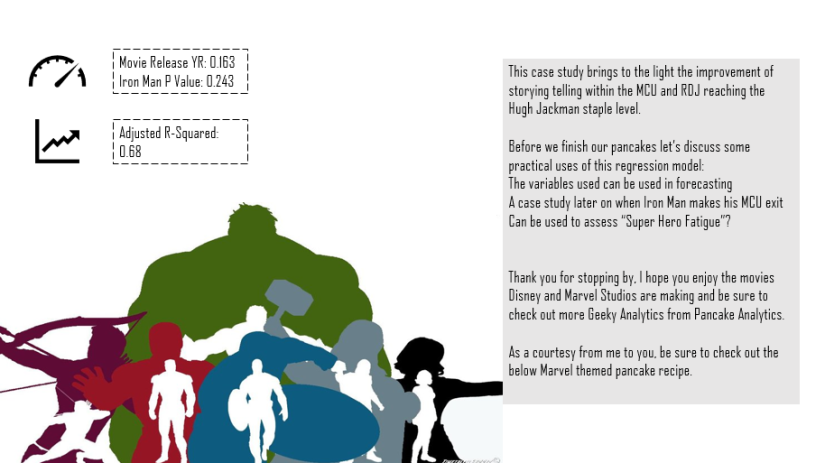 Here’s a treat for all the Pokémon Go players out there.  You’ll find below a recipe for a cluster analysis intended to guide you in building the most cost effective team of Pokémon. The goal of this recipe is to segment Kanto (GEN 1) Pokémon which can be found in the wild, with an emphasis on return on investment (ROI), or in this case Candy Cost investment and Gym Battle return.  Hope you enjoy! – Tom 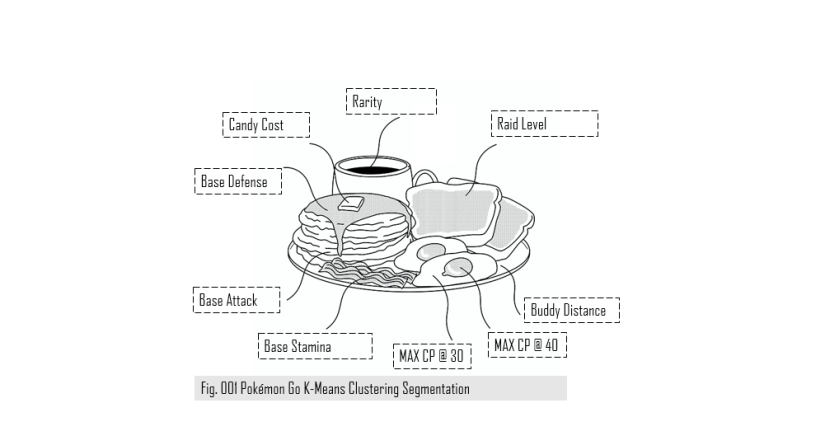 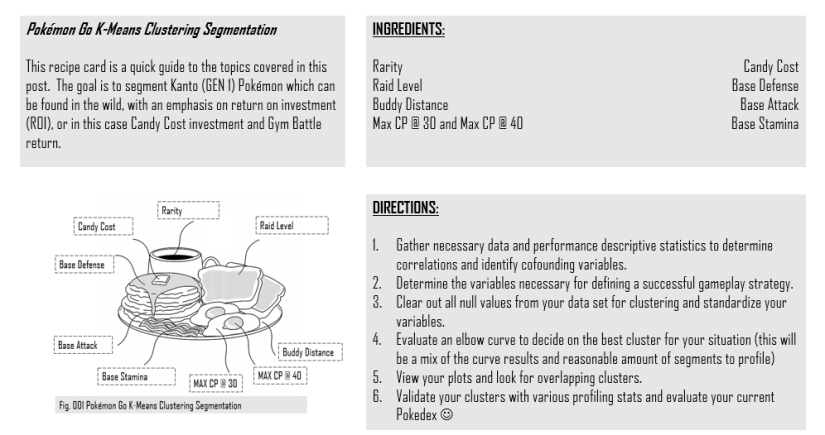 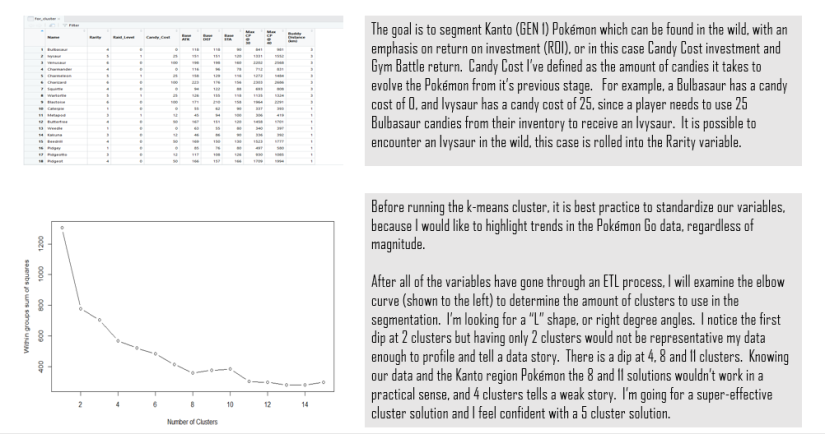 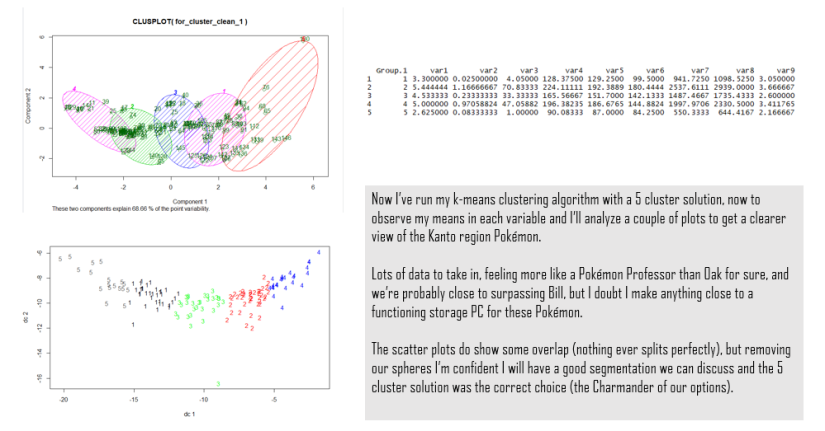 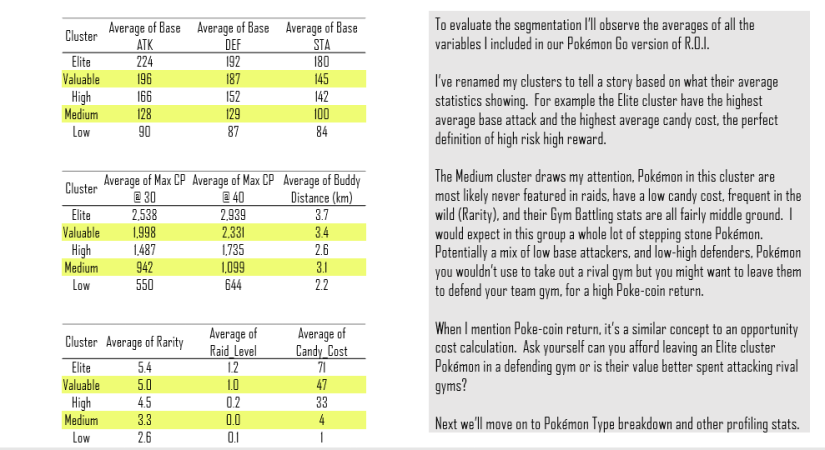 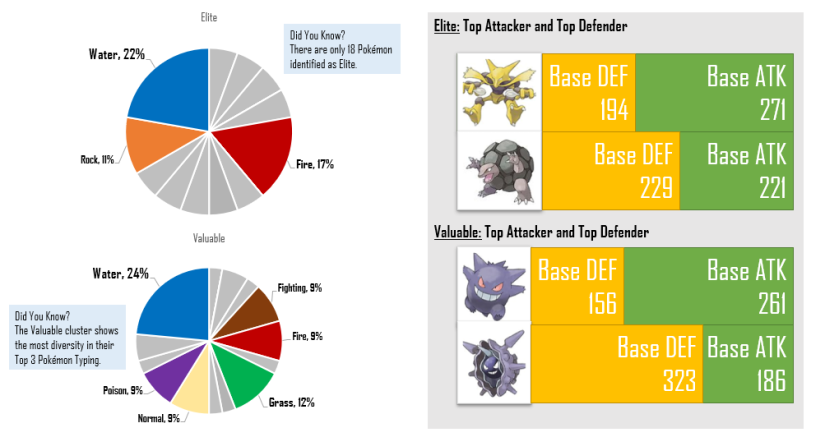 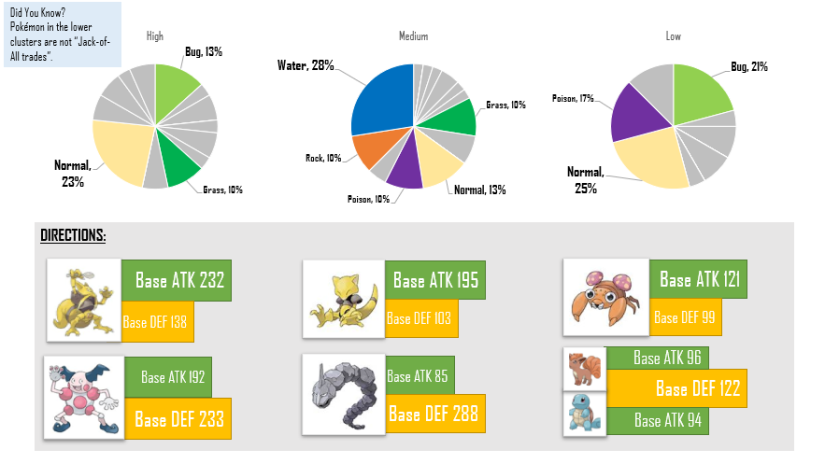 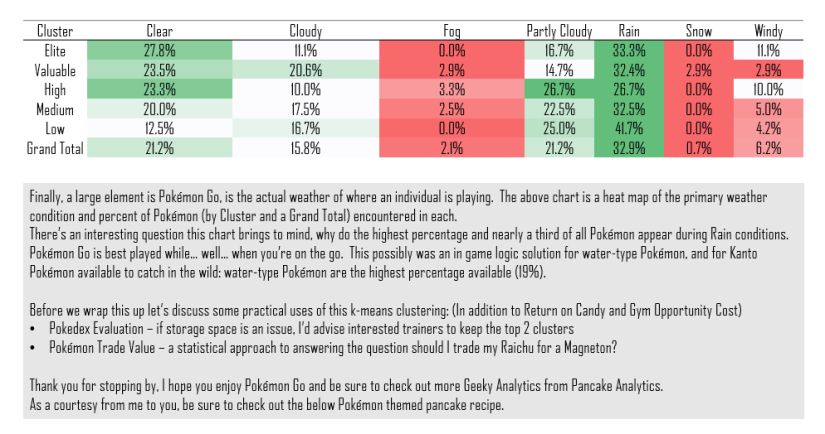 Support our theme for this week’s analytics: